Yeah, I Love This. 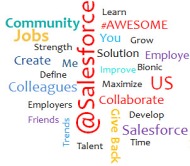 This weekend we held our third Annual Florida Salesforce.com User Group Event, “Dreamforce to YOU – Florida“. It was our most ambitious effort to date, with 12 sessions spanning from Project methodologies to a highly attended Developer Deep Dive session. We had two guest speakers this year, and with them onsite, it brought our Salesforce.com MVP count up to 4 – I speculated that meant we were likely the highest MVP count per capita on Saturday ( I could be wrong, but it was fun to think so!).

But the BEST thing – the most exciting moment – for me was when attendees stopped me in the hall and said things like, “I can’t WAIT to try the new formula I just learned!“ or “I think I may have just found a job!“. That’s what this whole Community thing is about, really.

How did this happen?

I started attending the Salesforce.com Orlando User Group over 4 years ago out of desperation – I needed to find employees who were creative, passionate, and really really into Cloud Computing. I was having NO luck through traditional methods. Cloud computing was then (as it is now) a hot profession, and talented folks weren’t just sitting about hoping someone would call. So after trying to get my HR department fired up to help me (no luck at the time) and then outsourcing through local headhunters, I faced the hard reality that it. Just. Wasn’t. Happening.

My last ditch effort IMMEDIATELY paid off. I met my first hire at that first meeting. He was a super star (still is!) looking for his next new challenge. He was just the guy I was looking for: smart as a whip, creative as hell, and looking for a tough puzzle to solve. I had a really tough puzzle and we made it official as fast as I could get the paperwork pushed through. That was the beginning of a great era: the era of getting things done.

I credit the Salesforce.com User Groups for making that year ‘happen’. I know I’d never have been able to push the ball as far down-field without the Community.

From there, the User Group and the extended Community has personally brought me friends, new skills, creative ways to attack my org’s issues, camaraderie, and the constant drive to do better. I’ve connected to some of the smartest people I’ve ever met (and that, my friends, is saying something!) through this Community. I was happy to become a co-leader of the Orlando User Group when there was a need shortly after I joined the User Group. Since then, we’ve had three Dreamforce to YOU events, many local User Group meetings, socials, and impromptu meetups. It’s been a fabulous ride!

Why is Community #AWESOME?

The idea for Dreamforce to YOU was simply to bring a day of content and collaboration to our Orlando User Group members. Co-leader Joshua Hoskins and I had just returned from Dreamforce 2009 and were totally

out of our minds with enthusiasm. What struck us then (and still gets me now) was how quickly things were accelerating in this space. We thought our members would probably take a Saturday to get together to talk about it. We were right! The first Dreamforce to YOU has very little resemblance to the event we put on this year – but the bottom line is the same.

It’s GREAT to have the camaraderie, connections, creativity, and collaboration an active Community brings. If you have a passion, and want to surround yourself with the people who can help you become the best version of yourself in that space, search for an organized community. There are Communities for just about everything now … and thanks to the little ol’ interwebs, a quick search gets you all details you need to jump in.

Find YOUR Community. Then Jump In. If you do it with a vengeance, it’ll pay off in spades (for you and for the group). I promise.

Dreamforce to You - Florida!

We love our Sponsors!

It’s true. We just simply couldn’t do this without them. We’re bringing Salesforce.com users together for an entire day of content, best practice, learning what’s new and how to use it in your company. We’re custom building the agenda based on the attendee preferences, AND we’re not charging people to attend. So, without the funding the Sponsors provide, we literally wouldn’t be able to make this event happen. Most of these Sponsors are active with our User Groups already, and all of these Sponsors are dedicated to helping to promote the event so we can meet our Event Team goal of building up the core User Group community which benefits us all.

Thank you from the Dreamforce to YOU – Florida Event Team to our 2012 Sponsors for supporting the Florida Salesforce.com Community!

Take a minute to get to know our dedicated 2012 Sponsors